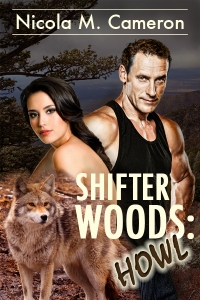 Laurie wants a news story. Caleb just wants to be left alone. But when the coyote shifters’ paths cross in New Mexico’s Sandia Mountains, Fate steps in and gives them something they never expected—each other.

Reporter Laurie Rivera is on the trail of a white slavery ring when she’s forced to run for her life in the foothills near Sandia Crest. Widowed sheriff and Alpha coyote shifter Caleb Lynch comes across the exhausted reporter and discovers to his shock that Laurie’s also a coyote shifter—and his new heart’s mate.

But Caleb never expected to have another chance at love, and Laurie has a good reason to fear being claimed, especially by an Alpha. As a snowstorm traps them in the sheriff’s cabin, Caleb must find a way around the barriers surrounding Laurie’s heart, and Laurie has to confront her past—and the humans who want her dead—if she wants a chance at her very own “happily ever after.”

Upstairs, Caleb stretched out in the big, comfortable bed, remembering how Paul Sleeping Turtle, Mike Ivanov and he had used some stout ropes and a lot of good-natured cursing to haul the mattress and box spring and over the loft railing. Anna had stood well out of the way downstairs, laughing at their language as they’d sweated and lugged the damn things upward. That night, however, she’d rewarded him in the newly installed bed, and Mike cheerfully baited him the next day about hearing the noise from a good mile away.

He’d never brought another woman to the cabin after Anna’s death, never even wanted to. But Laurie was different. He could smell her even up here, her essence rising with the heat from the fireplace and perfuming the loft with the smell of warm, sweet female in heat and in need of a good fucking.

He had no idea why Laurie had suddenly gone into heat while he was doing the dishes, but the change in her scent was unmistakable. Granted, sometimes an unmated Alpha could send a young, untried female into heat from simple proximity. But Laurie Rivera had to be in her early thirties, and if she was a virgin he’d eat his badge. The view he’d caught of her in the reflection of the kitchen window was of a female openly eyeing him and liking what she saw.

He grinned at the hand-hewn beams overhead. You know damn well what it means. She’s my mate, whether she likes it or not.

Which, ironically, was the problem. From what she’d told him, she was skittish as hell about the idea of being claimed. He couldn’t blame her, considering her experiences with her first Alpha. But it certainly messed up any chance he had with her, as well. And he didn’t have the luxury of taking his time and courting her, letting her get to know him over time. The moment the plows came through in the morning, Mike and this Gavin guy would be at the cabin to pick her up. After that, Laurie would be back in the city with her career and her life, never to return.

Albuquerque isn’t that far, though.

His subconscious—or his coyote, he wasn’t sure—had a point. He had to act tonight before he lost her. So, time to be sneaky.

He kicked off the blanket, bracing as the cool air hit his bare skin. He usually didn’t sleep naked during winter, but he wanted as much of his own aroma circulating as possible. He’d made a vow, yes, and he would keep it … unless Laurie gave him permission to break it. And the best way to make happen would be to tempt her upstairs with the scent of his desire and the promise of fulfilling her own.

Running a hand over his chest, he brushed the firm nub of a nipple and the crisp hair that led in a trail down to his groin. He followed it now, wrapping a hand around his soft cock and squeezing. It twitched at the stimulation; when he squeezed again, running his thumb over the upper ridge of the head, it began to thicken lazily.

He started a light, teasing stroke, not enough to get himself off but more than enough to get fully hard. Closing his eyes, he imagined Laurie climbing the stairs to the loft and his bed. The mattress would dip a bit as she climbed on it, moving on all fours to him. He knew she was the kind of female who, when her mind was made up, would stake her claim. There would be no fear, no anger, nothing but need and the deep knowledge that they belonged together.

He pictured her straddling his thighs, bending over to give him a deep, luscious kiss. Her breasts would swing forward and he could cup them, relishing the firm weight of them in each hand before he leaned up to take a nipple in his mouth. He already knew how the salt of her sweat and the sweet spice of her skin would taste, and how to rub the velvet flat of his tongue across the nub to make her gasp. He wanted to learn all the sounds she made in bed, the feminine moans and sighs that were music to a male’s ears.

His sweet female would be eager that first time, taking him in hand and guiding his straining cock between her legs. He groaned as he imagined the hot, wet squeeze of her sliding down around him, a perfect fit that would drive him out of his mind. She’d start riding him, her breasts jiggling with each rise and fall, and that perfect friction building between cock and cunt, all hot juices and slippery softness and his dick going deeper and deeper into her until he could feel the electricity rising, building at that sweet spot between balls and spine…

He pulled his hand away, half-enjoying the sparking, stuttering feeling of having his orgasm denied. Now he just had to wait.

Please, Laurie, I need you. Come to me.

Nicola Cameron is a married woman of a certain age who really likes writing about science fiction, fantasy, and sex. When not writing about those things, she likes to make Stuff™. And she may be rather fond of absinthe.

While possessing a healthy interest in sex since puberty, it wasn’t until 2012 that she decided to write about it. The skills picked up during her SF writing career transferred quite nicely to speculative romance. Her To Be Written work queue currently stands at around nineteen books, and her mojito-sodden Muse swans in from Bali every so often to add to the list, cackling to herself all the while.

Nicola plans to continue writing until she drops dead over her keyboard or makes enough money to buy a private island and hire Rory McCann as her personal trainer/masseur, whichever comes first.